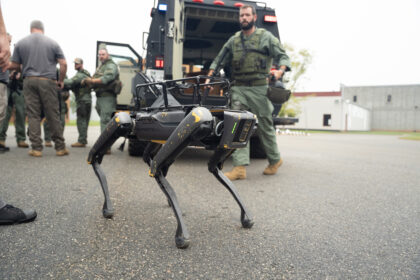 Public safety, government, and defense officials representing agencies and organizations across the globe descended upon the Guardian Centers training facility in Perry, Georgia last week for UTAC 2021. UTAC, the Unmanned Tactical Application Conference, is an annual event put on by FLYMOTION to showcase the intersection of technology and emergency/disaster response. It’s also an opportunity for public safety, government, and defense organizations to undergo real-world scenarios and hands-on training. This year’s conference was unlike any other drone or robotic event, establishing a precedent for an immersive experience that benefited everyone in attendance.

UTAC first launched in 2019 and, after a brief hiatus in 2020 due to the global pandemic, returned this year. Despite it only being the second year, the conference quadrupled in size—a testament to the growing integration of unmanned systems in the public safety sector.

FLYMOTION co-founders Ryan English and David Stratchko attended many UAS conferences and noticed one key element missing from these shows. These conferences were nothing more than static exhibitions, none of which offered a hands-on environment for attendees. Thus, the idea of UTAC was born and fulfilled a desperate need in the UAS industry.

Through mock scenarios interspersed with flight courses, product demos, and more, FLYMOTION aimed to directly connect industry leaders with end-users, allowing participants to interact with technology and its representatives first-hand. UTAC, however, evolved into something much deeper. With so many first responders in attendance, the conference transformed into a space to share ideas, tactics, and best practices for a still-developing drone community. Scenario instructors, guest speakers, and panels are integral to the UTAC experience. All guide discussions on topics relevant to law enforcement, fire rescue, emergency management, government, and defense professionals. 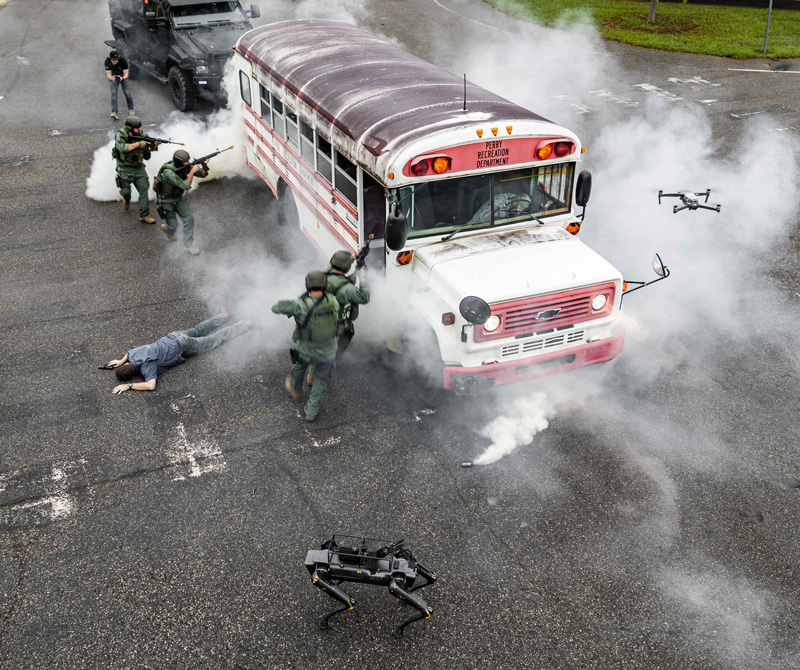 FLYMOTION was not alone in making this vision a reality. UTAC benefited from the title sponsorship of the software company Auterion and by the presence of their Vice President of Public Safety, Romeo Durscher. A respected leader in the unmanned systems industry, Durscher’s extensive experience at NASA, DJI, and now Auterion helped focus the conference on the positive impact technology can have within real-world operations. Putting this concept into action involved the use of an Auterion-powered VTOL UAV from Quantum Systems providing overwatch during the training scenarios.

Along with the expertise of individuals like Durscher and others, UTAC attendees saw the application of unmanned aerial, ground, and maritime systems in eight hyper-realistic scenarios.

A mock active shooter/bus hostage scenario demonstrated the use of aerial systems like the DJI Mavic 2 Enterprise Advanced. Equipped with a drop mechanism, it delivered a phone while a tethered drone provided long-endurance overwatch. On the ground, Boston Dynamics’ Spot deployed from the SWAT APC to deliver medical supplies, all to keep officers safe. In this way, officers stayed out of range of the shooters until receiving the signal to take them down. Smoke, flashbangs, and screaming role players made for the immersive, realistic demonstrations FLYMOTION strives to create.

Law enforcement officers regularly conduct vehicle stops. However, despite their frequency, each case poses a significant risk to the officer. The first day of UTAC 2021 kicked off with a simulated pursuit and vehicle stop. The dangerous nature of the suspect created a standoff between officers and the driver.

Officers then deployed a DJI Mavic 2 Enterprise Advanced with the speaker attachment, flying it up to the car and providing a vantage point beyond the patrol cars. Using the speaker, officers told the suspect to get out of the car. As the suspect stepped out of the vehicle to face the officers, the UAV pilot noticed a handgun in his waistband. So, when the suspect suddenly drew his gun, officers fired first, taking down the suspect. Law enforcement never left the safety of their vehicles while maintaining an elevated situational awareness all due to the effective use of unmanned aircraft.

Hazmat operations are challenging because the true nature of the situation is often unknown. Sending in firefighters to investigate takes time, often escalates an incident, putting more lives at risk. However, the tanker crash scenario at UTAC 2021 proved this doesn’t have to be the case.

Pairing a DJI Matrice 300 with a Squishy Robotics Sensor enabled first responders to assess the situation quickly and accurately. The Matrice, equipped with a release mechanism, flew the sensor over the leaking tanker and dropped it close to the fissure. The unique structure of Squishy Robotics’ sensor protected it from the fall. It also negates the need for a parachute that could drift away from the target. Immediately, firefighters had a video feed of the rupture along with data from a 4-gas meter. The Matrice hovered overhead to monitor the situation with its cameras. In a matter of minutes, responders knew the severity of the accident, along with its risks, before going in.

As unmanned aircraft become more accessible to the general consumer, the risk of a rogue pilot penetrating high-risk airspace also grows. Large events, government buildings, and airports are all potential targets for a drone attack. DJI’s Aeroscope is one layer of an effective multi-tier defense system.

Confined and low-visibility spaces present a unique set of difficulties for first responders. Darkness or particles in the air limit the situational awareness of decision-makers. Similarly, smaller spaces are challenging, making it difficult to bring larger equipment and more personnel.

The Subway Terrorist Attack scenario demonstrated this with a mile-long tunnel full of smoke. Three types of technologies proved to be effective in overcoming these barriers. Squishy Robotics’ sensors were placed at points along the tunnel, feeding back video data to the Incident Command post. These sensors deployed from the back of Boston Dynamics’ Spot, capable of navigating the difficult train tracks in low visibility.

Both stationary and mobile video feeds developed an immediate assessment of the situation. Once responders declared the scene safe, Emesent’s LIDAR scanner mounted to a Matrice flew down the length of the tunnel. Its LIDAR data created a high-resolution 3D map for post-incident analysis.

Law enforcement, along with search and rescue units regularly respond to search for missing people. These can range from elderly individuals with dementia to minors.

In the Missing Person scenario during UTAC, an elderly individual had wandered out into the woods. Police deployed both deployed an unmanned aircraft and a K-9 unit. K-9s are effective at tracking an individual but they are limited by obstacles like roofs and cliffs. From its position high above the search grid, an aircraft can locate an individual with optical and thermal cameras in the vicinity indicated by the K-9.

Aircraft and K-9 location data were relayed to command using ATAK or Android Team Awareness Kit and NSION’s connectivity platform. After the K-9 picked up the scent, the UAS pilot flew in the indicated direction to find the missing person alive and well. Adding the UAS component to a search leads to greater, more efficient search patterns while preventing false positives.

Much like a missing person incident, a wanted subject case poses similar challenges. Because the suspect is possibly armed, the threat to searchers is far greater.

The Wanted Subject scenario demonstrated how difficult these operations can be. After being stopped by police officers, the suspect fled his vehicle running into a densely wooded area – at night.

Both Matrice and Quantum Vector aircraft deployed, using their thermal capabilities to see into the forest. Because of the danger this situation presented, officers searched cautiously, using feeds from the aircraft to anticipate any surprises. Once the aircraft located the heat signature of the suspect, officers were able to close in on his position, apprehending him.

As in all of our scenarios, the NSION platform fed flight and video data back to the command post. This permitted the audience, far away from the incident, to be immersed in the exercise. More importantly, they witnessed how a UAS resource immensely mitigated the threat of an armed suspect in the woods. Officers were able to complete their mission safely, a primary mission of unmanned systems in public safety.

Unfortunately, in the real world, some individuals do not survive. In recovering the submerged casualty victim (portrayed by a dummy), the Chasing M2 Pro underwater system was sent ahead of the dive team on scene. Operators were able to locate the body and find the best path for the divers to enter the flooded structure. Any risk to first responders was significantly reduced while completing the mission of saving lives. 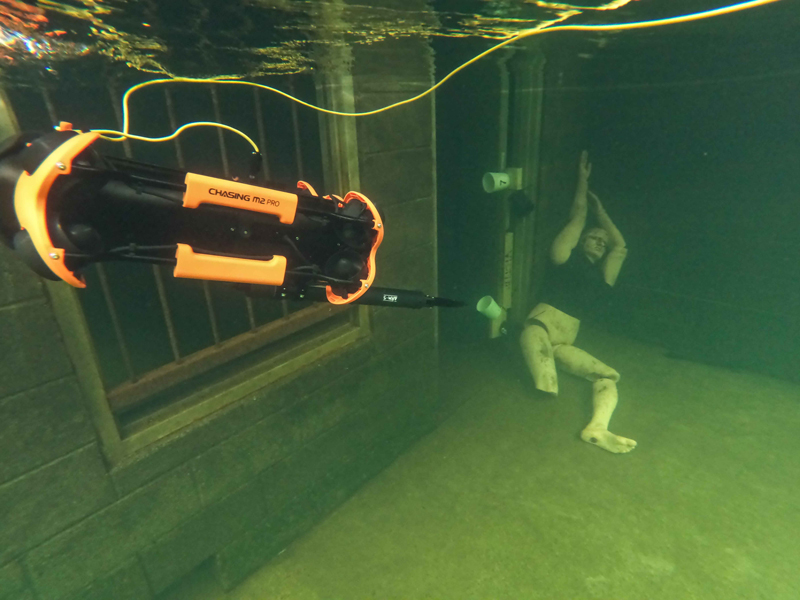 Observing technology in action is only one aspect of training. To understand the full potential of unmanned systems, the conference allocates time for attendees to fly their own drones. This happens both in scenario environments and in a variety of separate courses. Representatives of NIST, the National Institute of Standards and Technology, managed the UTAC training areas.

NIST is responsible for establishing standards across different technology fields with flight and robotic training being parts of those standards. In a typical NIST course, instructors test pilots on the accurate reading of the diagrams and symbols placed in white buckets scattered throughout a course. Characters varied in size, forcing pilots to get up close to read them. Some buckets were placed near obstructions or at awkward angles, testing both the pilot’s situational awareness and flying abilities.

This methodology accurately tests the hand-eye coordination required by public safety pilots to operate in challenging conditions. For example, a law enforcement pilot may need to fly close to a stopped vehicle to identify a suspect. A fire rescue pilot working on a structure fire or collapsed building will have to avoid obstacles. Both situations require agility and responsiveness gained during these conference training sessions.

The vision of UTAC takes the traditional conference beyond static displays. At FLYMOTION’s Unmanned Tactical Application Conference, demonstrations and industry connections are open doors to individual understanding and training. The out-of-the-classroom and the innovative atmosphere turn the varied experiences of first responders into resources for their counterparts. Participants walk away with more than business cards. They have a deeper and quantitative understanding of the application of unmanned systems for the safety of our communities. 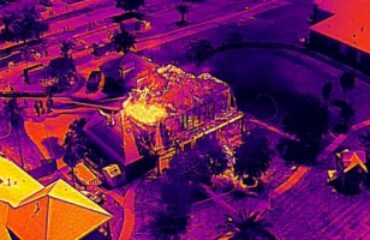 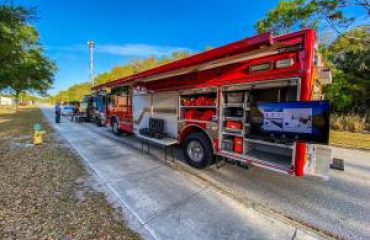 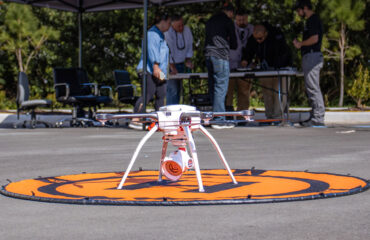