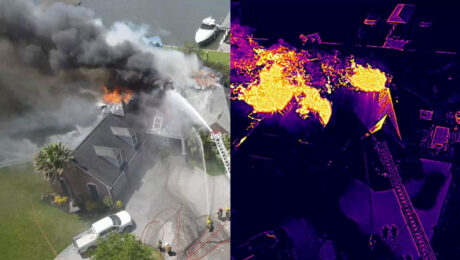 One night in the United Kingdom, a man was traveling down the road. It was wintertime so the weather outside was undesirable to say the least. The temperature had dropped below zero, so traffic would have been light due to everyone staying inside to keep warm. As the man was traveling, he lost control of his vehicle, crashing on the side of the road. Authorities were called, but when they arrived on the scene the man was nowhere to be found. There was simply no trace of him. He had vanished without a trace. Those who responded quickly called for a search team, believing he wouldn’t have gone far due to the freezing temperatures. The team on the ground searched for the man, but he was still nowhere to be found. They search went on and more time passed, but still no sign of him. The responders were stumped, finding themselves wondering where the man was, if he was in need of medical aid, or if he had just walked away unharmed. After the lengthy search on foot, they decided to launch a UAS equipped with a thermal imaging payload. Within minutes, they found the man collapsed in a ditch nearly 500 ft away. The UAS was able to lead rescuers directly to where he was, allowing them to administer first aid.

Thermal cameras are becoming more and more common in public safety, inspection, and several other industries. But why now? Was there something previously keeping thermal imaging out of these industries? Not necessarily, but thermal devices are much more accessible now than before.

How do people benefit from thermal imaging?

Technology can enhance human capabilities in unimaginable ways, and thermal imaging is no exception. Visual light does not affect these cameras which enables them to see through cover, such as smoke or darkness, to reveal what lies behind it. One of industries that benefits from these capabilities the most are public safety agencies during night operations, fire rescue, or search and rescue missions.  This technology allows first responders to find dangerous hotspots, navigate tough terrain safely, and locate those who are in need more efficiently.

There are hundreds, if not thousands, of success stories about how public safety agencies use thermal imaging to rescue individuals. Access to this kind of technology is vital. Airborne thermal imaging makes a difference in saving the lives of the responders and those who are being responded to. We provide solutions equipped with the tools you need when the calls come. Aerial thermal imaging is easier to own and operate than you probably realize! Go to flymotionus.com to view all of the solutions we supply and get the most out of your missions.