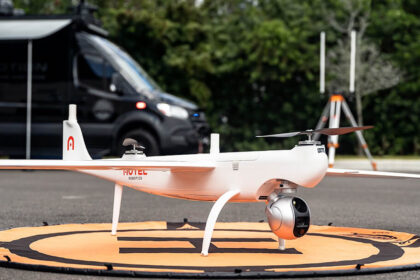 Think of the word “drone.” What probably comes to mind is a quadcopter — a small aircraft with four rotors. Since most UAVs are designed this way, it’s a logical association. Their popularity, however, often overshadows another category of capable drones.

Fixed-wing UAVs provide significant advantages in flight performance over quadcopters, increasing the number of applications. Autel’s Dragonfish drone is a perfect example of this advantage. In this article, (1) we compare fixed-wing and rotary-wing drones, and (2) highlight the specific features of the Dragonfish that make it an excellent ISR aircraft.

As we mentioned, drones are classified as either fixed-wing or rotary-wing aircraft. Rotary-wing systems include helicopters, quadcopters, and hexacopters. Fixed-wing UAVs are built like traditional airplanes, with wings and horizontal propulsion.

Apart from the clear advantages of VTOL and hovering, rotary-wing UAVs also have:

However, as the chart indicates, rotary-wing aircraft are power-intensive and inefficient. This results in limited flight time, and in some cases, a limited payload capacity.

Fixed-wing aircraft, on the other hand, excel where quadcopters are deficient.

These attributes, of course, come at a cost. Fixed-wings cannot hover. They also need space (and sometimes a mechanism) for launch and recovery. Furthermore, physics doesn’t allow them to be as agile.

The ideal UAV would combine the VTOL capability of quadcopters with the endurance of fixed-wing aircraft. The Autel Dragonfish is designed to do just that.

The Dragonfish is what is referred to as a “tilt rotor” aircraft. Like the military’s renowned V-22 Osprey, the Dragonfish takes off and lands vertically, then tilts its wingtip rotors 45 degrees for horizontal flight. It has two additional vertical rotors that only operate during the takeoff, landing, and hovering phases of flight.

As a result, the Autel Dragonfish drone is a highly-capable aircraft, carrying high-resolution payloads for flight times unmatched by quadcopters. This aircraft comes in three different models: Lite, Standard, and Pro. These vary in wingspan, flight time, and payload capability. Nonetheless, all three provide the following features:

Search-and-rescue missions are endurance operations, requiring personnel and equipment to work for hours, if not days continuously. The scope of a wildfire response also demands a similar level of endurance. The Dragonfish Standard model boasts a max flight time of 120 minutes and a range of 10 km — optimal specifications to handle either mission.

Automated functions facilitate its use as a DFR platform, an operation model adopted by several law enforcement agencies. Drone as a First Responder (DFR) programs launch aircraft from a central location and arrive on-scene before personnel. Because of the high volume of flights, automating functions like navigation, subject tracking, and landing ensures continuity of operation.

Inspection missions require detailed data without damaging the aircraft or infrastructure. Stabilized payloads like the DG-T3 contain a 20x optical zoom camera to capture 4K video from a safe distance.

Finally, VTOL capability provides operators the flexibility to deploy the aircraft anywhere. A Dragonfish launched on-scene can spend most of its flight time over the incident instead of flying to and from a landing zone.

The Autel fixed wing drone makes the applications of UAS in public safety and defense operations more plausible. The “best of both worlds,” it is a versatile aircraft capable of fulfilling a number of demanding missions. If you’re interested in learning more about fixed-wing VTOLs like the Dragonfish, visit our website, or contact a FLYMOTION representative. 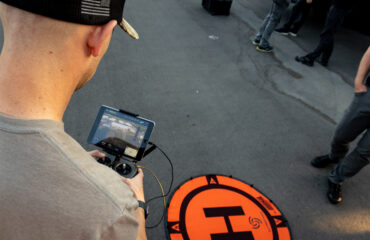